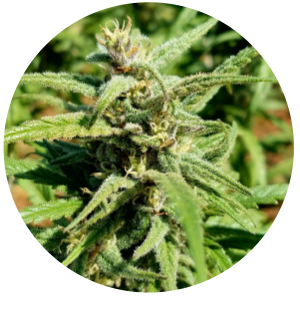 ATF (aka Alaskan Thunder F*ck) was originally cultivated in Matanuska Valley, Alaska. Sources are conflicted about the genetic origin of this strain, but most seem to agree it began as a cross between Russian Ruderalls and an unknown type of Northern California Sativa, later to be crossed again with Afghani Landrace in the 1970s. ATF is a rare earthy, pungent, sativa-dominant hybrid .Widely known as one of the best cannabis strains around, ATF delivers a soaring, euphoric, cerebral high that electrifies the senses, relaxes the body, and lifts the spirits. ATF is notably pungent and sweet on the palate, but it also has notes of citrus, banana, and spice with grape undertones that make for a deliciously unique taste experience. Dominate terpenes in ATF are Linalool, Alpha Pinene and Myrcene in order of dominance.

Linalool is a monoterpenoid and has been described as having floral and lavender undertones. Varieties high in linalool promote calming, relaxing effects. Linalool has been used for centuries as a sleep aid. Linalool lessens the anxious emotions provoked by pure THC, thus making it helpful in the treatment of both psychosis and anxiety. Studies also suggest that linalool boosts the immune system; can significantly reduce lung inflammation; and can restore cognitive and emotional function (making it useful in the treatment of Alzheimer’s disease).