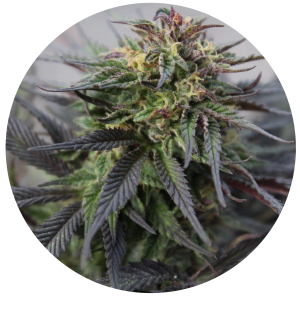 The classic cannabis strain Girl Scout Cookies (aka GSC) is a Cannabis Cup award-winning strain comprised of OG Kush and Durban Poison and is perfect for an after-dinner treat or a nightcap. GSC has some incredibly powerful effects that are beneficial to the medical community in numerous ways. First and foremost, this is a great strain for treating chronic pain, inflammation, muscle tension, and cramps. Its highly sedative properties will have you feeling relief in no time. Additionally, many use this strain as a stress reliever. The tranquilizer-like feeling of this bud puts you in a place of complete relaxation, slaying stress and even getting you ready for a good night’s sleep. GSC is famous for its pungent, dessert-like aroma & flavor profile featuring bold notes of mint, sweet cherry, and lemon. Dominate terpenes in Girl Scout Cookies are Beta-Caryophyllene, Humulene and Limonene in order of dominance.