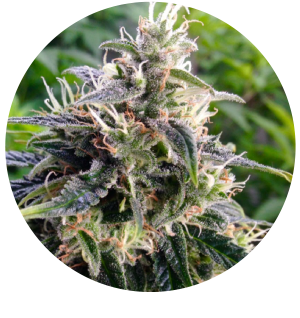 Northern Lights, also known as “NL,” is an indica marijuana strain made by crossing Afghani with Thai. Northern Lights produces euphoric effects that settle in firmly throughout the body, relaxing muscles and easing the mind. One of the most famous cannabis cultivars of all time, the Northern Lights strain has pretty much attained legendary status among seasoned weed lovers. This super popular, almost pure indica is a long-time favorite for its potency and powerful mix of mind-body effects. Smooth, earthy, hashy, and slightly sweet, Northern Lights has an old-school flavor profile that can be tough to find among today’s top-shelf strains. This well-loved bud has several potential benefits for medical patients, while recreational smokers turn to the strain to chill out and relax at the end of a long, stressful day. Dominate terpenes in Northern Lights are Terpinoline, Beta-Caryophyllene and Limonene in order of dominance.

Besides showing up in many cannabis varieties, terpinolene is also found in turnips and turpentine. For a long while, research scientists believed terpinolene to act as a sedative. This was due to experiments that determined mice inoculated with terpinolene showed a great reduction in muscle motility contributing to sedation. However, these findings contradicted anecdotal evidence of cannabis consumers who reported that varieties high in terpinolene caused stimulation. Upon further investigation, it was found that terpinolene’s ability to sedate may in fact be reversed when combined with THC. Therefore, research scientists believe that while terpinolene may act as a sedative in isolated form, it most likely acts as a stimulant when in the presence of THC.