Revolutions do not come out of nowhere.

They do not occur spontaneously. Rather, they are the result of forces that have been at play for years (and sometimes generations), often working behind the scenes. They are the result of embers carefully tended. Then, when the moment is right (or the technology becomes advanced enough), they can ignite to usher forth great change. The story of CBD, hemp and cannabis is an excellent example of how a long and winding road can lead to a revolution.

"The number of potential synergies of medicinal interest within the cannabis plant boggles the mind and should keep researchers quite busy for at least the next decade."

Humans have used cannabis for millennia, and this meant being subject to all the cannabinoids in cannabis, most notably Tetrahydrocannabinol (THC). People who used cannabis found that they felt a pleasant "high" as well as a reduction in their pain. Many of them felt other pleasant effects as well. Anyone could be forgiven for assuming that these effects were all one in the same, and not the result of a multitude of individual cannabinoids, each with their own properties, working synergistically in the body in what has become known as "The Entourage Effect" of cannabinoids in the human body.

While THC provides the famous intoxicating high, it is CBD and other minor cannabinoids working in unison that give cannabis their cessation of pain and a wide range ofother benefits.

A great first step to understanding the entourage effect of cannabis is to understand how these distinct compounds and molecules differ from one another, and how these substances interact with the Endocannabinoid System in our bodies when we use them. 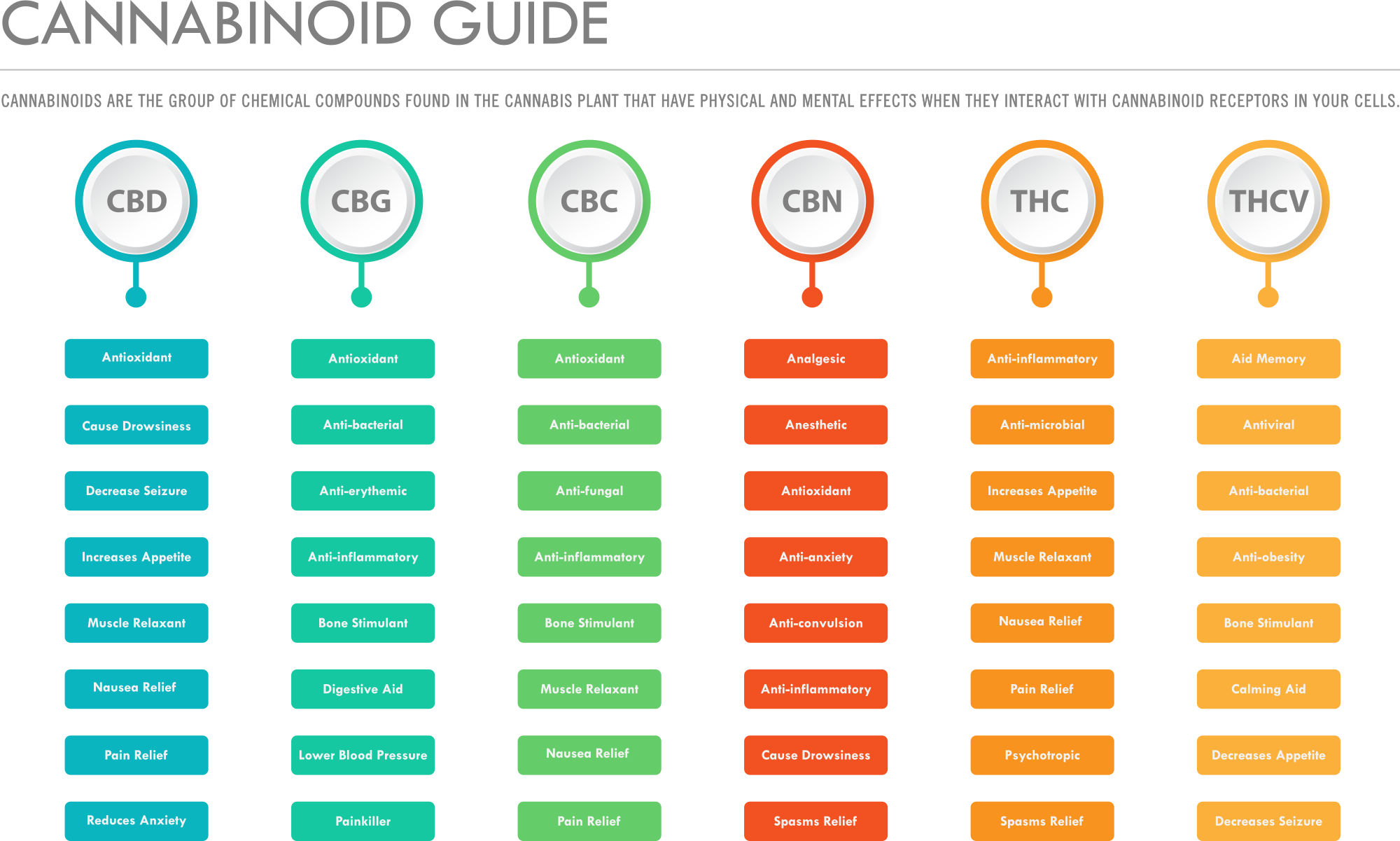 The Major and Minor Cannabinoids

"Simply put, and politics aside, marijuana is the single most medicinally valuable plant that has ever existed."

Delta-9-tetrahydrocannabinol (Δ9-THC), better known as THC, is the marijuana plant's primary component for causing psychoactive effects. THC was first discovered and isolated by Bulgarian-born chemist Raphael Mechoulam in Israel in 1964. It was found that, when smoked, tetrahydrocannabinol is absorbed into the bloodstream and travels to the brain, attaching itself to the naturally-occurring endocannabinoid receptors located in the cerebral cortex, cerebellum, and basal ganglia. These are the parts of the brain responsible for thinking, memory, pleasure, coordination and movement.

Both CBD and THC share the exact same molecular formula, C21H30O2, containing twenty-one atoms of carbon, thirty of hydrogen and two of oxygen, however their effects are quite different from one another. Cannabidiol (CBD) is a phytocannabinoid discovered in 1940. It is one of more than identified cannabinoids in cannabis plants, along with tetrahydrocannabinol (THC), and accounts for up to 40% of the plant's extract. As of 2019, clinical research on CBD included studies related to anxiety, cognition, movement disorders, and pain, but there is insufficient high-quality evidence that cannabidiol is effective for these conditions.

Cannabidiolic Acid (CBDa), is a cannabinoid found in cannabis plants. It is most abundant in the glandular trichomes on the female seedless flowers or more accurately infructescence often colloquially referred to as buds. CBDa is the chemical precursor to cannabidiol (CBD). Through the process of decarboxylation cannabidol is derived via a loss of a carbon and two oxygen atoms from the 1 position of the benzoic acid ring. (Heating or catalyzing CBDa transforms it into CBD, thereby increasing the total CBD level.)

Cannabigerolic Acid (CBGa) is the acidic form and precursor of Cannabigerol (CBG). It is a dihydroxybenzoic acid and olivetolic acid in which the hydrogen at position 3 is substituted by a geranyl group. It is a biosynthetic precursor to Delta-9-tetrahydrocannabinol (THC), which is the principal psychoactive constituent of the Cannabis sativa plant. It is also a diterpenoid, a polyketide, a member of resorcinols and a phytocannabinoid. It derives from an olivetolic acid. It is a conjugate acid of a cannabigerolate.

Cannabinol (CBN) is a mildly psychoactive cannabinoid found in trace amounts from Cannabis. CBN is mostly found in cannabis that is aged and stored, and is derived from the plant's main psychoactive chemical, tetrahydrocannabinol (THC). Cannabinol was the first cannabis compound to be isolated from cannabis extract in the late 1800s. Then by the 1930s, the first to have its structure determined and in 1940, to have scientists achieve its chemical synthesis. There is usually little CBN in a fresh plant. However, if cannabis is exposed to air or ultraviolet light (for example, in sunlight) for a prolonged period of time, THCA will convert to cannabinolic acid (CBNA). CBN is then formed by decarboxylation of CBNA.

Cannabichromene (CBC), also called cannabichrome, is one of more than 120 cannabinoids found in the Cannabis plant,and is therefore a phytocannabinoid. It bears structural similarity to the other natural cannabinoids, including tetrahydrocannabinol (THC), tetrahydrocannabivarin (THCV), cannabidiol (CBD), and cannabinol (CBN), among others. CBC and its derivatives are as abundant as cannabinols in cannabis. It is more common in tropical cannabis varieties. CBC is non-psychoactive and does not affect the psychoactivity of THC. CBC acts on the TRPV1 and TRPA1 receptors, interfering with their ability to break down endocannabinoids (chemicals such as anandamide and 2-AG that the body creates naturally).