We are coming to understand, through both preliminary scientific study and a growing tide of anecdotal evidence from cannabis patients, that the active compounds in cannabis seem to work together in a very synergistic way; that the whole is bigger than the sum of it's parts.

"Cannabis is inherently polypharmaceutical, and synergy arises from interactions between its multiple components."

Referred to as The Entourage Effect, this idea is what underlies most conversations you might hear on full spectrum hemp vs. individual cannabinoid extracts, such as CBD isolate. Originally proposed by Dr. Raphael Mechoulam and Shimon Ben-Shabat in 1999 and refined by Dr. Ethan Russo in 2010. The main idea behind The Entourage Effect is that the cannabinoids present in both cannabis and hemp work synergistically together, and synergistically with all the other phytochemicals naturally present in plants (terpenes, flavonoids, fatty acids, esters, lactones, etc). Together these compounds can provide a better therapeutic result than any individual one on its own. While much more research is needed to fully understand how these complex relationships work, there has been some initial work done by examining the synergistic relationship between CBD and THC. 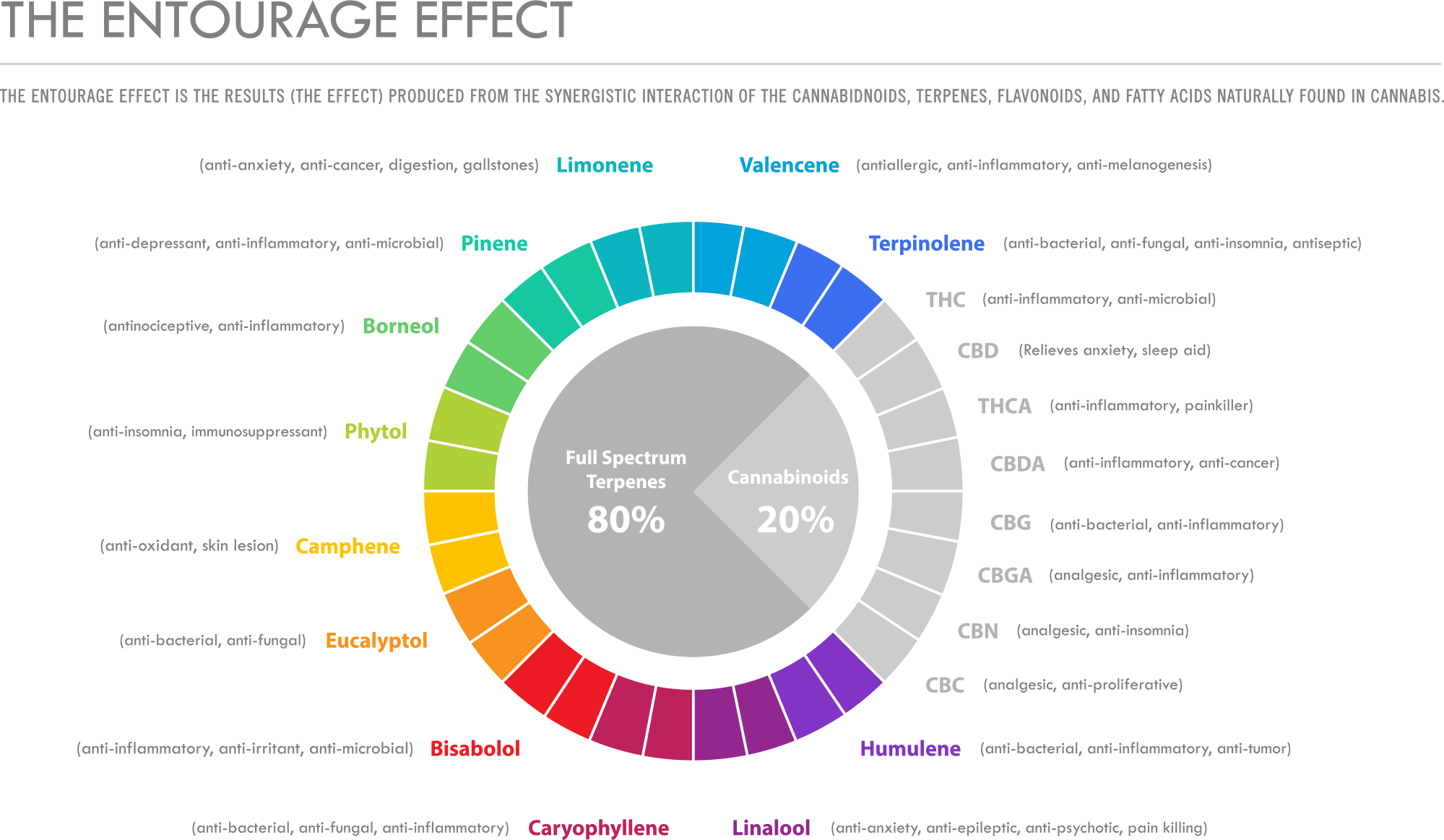 The biosynthesis of the cannabinoids

Cannabis has been integral to Eurasian civilization for millennia, but a century of prohibition has limited investigation. With spreading legalization, science is pivoting to study the pharmacopeia of the cannabinoids, and a thorough understanding of their biosynthesis is required to engineer strains with specific cannabinoid profiles. This review surveys the biosynthesis and biochemistry of cannabinoids. The pathways and the enzymes’ mechanisms of action are discussed as is the non-enzymatic decarboxylation of the cannabinoic acids. There are still many gaps in our knowledge about the biosynthesis of the cannabinoids, especially for the minor components, and this review highlights the tools and approaches that will be applied to generate an improved understanding and consequent access to these potentially biomedically-relevant materials.

Tetrahydrocannabinol (THC) has been the primary focus of cannabis research since 1964, when Raphael Mechoulam isolated and synthesized it. More recently, the synergistic contributions of cannabidiol to cannabis pharmacology and analgesia have been scientifically demonstrated. Other phytocannabinoids, including tetrahydrocannabivarin, cannabigerol and cannabichromene, exert additional effects of therapeutic interest. Innovative conventional plant breeding has yielded cannabis chemotypes expressing high titres of each component for future study. This review will explore another echelon of phytotherapeutic agents, the cannabis terpenoids: limonene, myrcene, α-pinene, linalool, β-caryophyllene, caryophyllene oxide, nerolidol and phytol. Terpenoids share a precursor with phytocannabinoids, and are all flavour and fragrance components common to human diets that have been designated Generally Recognized as Safe by the US Food and Drug Administration and other regulatory agencies. Terpenoids are quite potent, and affect animal and even human behaviour when inhaled from ambient air at serum levels in the single digits ng·mL−1. They display unique therapeutic effects that may contribute meaningfully to the entourage effects of cannabis-based medicinal extracts. Particular focus will be placed on phytocannabinoid-terpenoid interactions that could produce synergy with respect to treatment of pain, inflammation, depression, anxiety, addiction, epilepsy, cancer, fungal and bacterial infections (including methicillin-resistant Staphylococcus aureus). Scientific evidence is presented for non-cannabinoid plant components as putative antidotes to intoxicating effects of THC that could increase its therapeutic index. Methods for investigating entourage effects in future experiments will be proposed. Phytocannabinoid-terpenoid synergy, if proven, increases the likelihood that an extensive pipeline of new therapeutic products is possible from this venerable plant.

The Case for the Entourage Effect and Conventional Breeding of Clinical Cannabis: No “Strain,” No Gain

The topic of Cannabis curries controversy in every sphere of influence, whether politics, pharmacology, applied therapeutics or even botanical taxonomy. Debate as to the speciation of Cannabis, or a lack thereof, has swirled for more than 250 years. Because all Cannabis types are eminently capable of cross-breeding to produce fertile progeny, it is unlikely that any clear winner will emerge between the “lumpers” vs. “splitters” in this taxonomical debate. This is compounded by the profusion of Cannabis varieties available through the black market and even the developing legal market. While labeled “strains” in common parlance, this term is acceptable with respect to bacteria and viruses, but not among Plantae. Given that such factors as plant height and leaflet width do not distinguish one Cannabis plant from another and similar difficulties in defining terms in Cannabis, the only reasonable solution is to characterize them by their biochemical/pharmacological characteristics. Thus, it is best to refer to Cannabis types as chemical varieties, or “chemovars.” The current wave of excitement in Cannabis commerce has translated into a flurry of research on alternative sources, particularly yeasts, and complex systems for laboratory production have emerged, but these presuppose that single compounds are a desirable goal. Rather, the case for Cannabis synergy via the “entourage effect” is currently sufficiently strong as to suggest that one molecule is unlikely to match the therapeutic and even industrial potential of Cannabis itself as a phytochemical factory. The astounding plasticity of the Cannabis genome additionally obviates the need for genetic modification techniques.