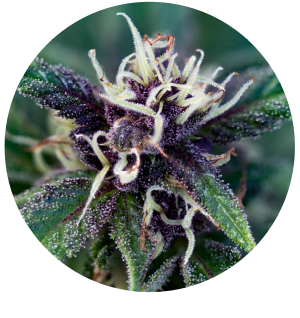 With a menacing name that hints at its powerful psychoactivity (as cannabis), Durban Poison is a pure South African Sativa-dominant marijuana strain named after the South African port city that it originated in. Durban poison is an award-winning Sativa strain that’s highly prized for its unique citrus flavor with a bit of spicy hashish. Since the 1970s, this marijuana has been on sale. It has an earthy smell, with notes of spicy citrus and peppermint on top of its classic “dank” aroma. The smoke tastes sweetly herbal when exhaled through the mouth; this flavor profile can be described as both piney and peppery at times! Durban Poison is the perfect strain to help you stay productive through a busy day, when exploring the outdoors, or to lend a spark of creativity. Dominate terpenes in Durban Poison are Terpinolene, Humulene and Beta-Caryophyllene in order of dominance.

α-Terpineol, terpinen-4-ol, and 4-terpineol are three closely related monoterpenoids. The aroma of terpineol has been compared to lilacs and flower blossoms. Terpineol is often found in cannabis varieties that have high pinene levels, which unfortunately mask the fragrant aromas of terpineol. Terpineol, specifically α-terpineol, is known to have calming, relaxing effects. It also exhibits antibiotic, AChe inhibitor and antioxidant antimalarial properties.