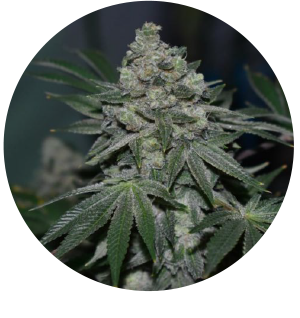 The classic cannabis strain Clementine is a energizing sativa-dominant strain that is made by crossing Tangie with Lemon Skunk. This strain is loved for its sweet taste and citrus aroma. If you are prone to groggy mornings, the Clementine strain is great for putting a pep in your step. It’s energizing and refreshing and may help you to feel focused and awake. It is also super tangy, zingy, and tastes like clementines, hence the name. At the 2015 Cannabis Cup held in Michigan, a concentrated live resin of Clementine was awarded second place in the Best Sativa category. Clementine’s cerebral effects come on strong and fast and induce a state of heightened alertness and focus. This strain also provides a short-term energy boost, which is why it is a popular choice among cannabis users who like to “wake-and-bake”. Naturally, given its effects, the Clementine strain is only suitable for morning or afternoon use. Dominate terpenes in Clementine are Terpinoline, Ocimene and Beta-Caryophyllene in order of dominance.

α-Terpineol, terpinen-4-ol, and 4-terpineol are three closely related monoterpenoids. The aroma of terpineol has been compared to lilacs and flower blossoms. Terpineol is often found in cannabis varieties that have high pinene levels, which unfortunately mask the fragrant aromas of terpineol. Terpineol, specifically α-terpineol, is known to have calming, relaxing effects. It also exhibits antibiotic, AChe inhibitor and antioxidant antimalarial properties.

Ocimene, a monoterpene also identified as Beta-Ocimene, is derived from the Greek word “Ocimum,” which means basil. This terpene offers many medicinal and therapeutic uses for its uplifting effects, anti-convulsant, anti-inflammatory, anti-viral, and anti-fungal properties. Although its profile is not predominantly herbal, Ocimene displays a woody aroma and can be described as fruity or citrusy in terms of flavors. As mentioned earlier, Ocimene can be found in mint, parsley, basil, tarragon, kumquats, mango fruits, lavender, orchid flowers, Hops, and bergamot. Ocimene is used in different everyday products such as perfumes, fabric softeners, antiperspirants, shampoos, soap, and hard-surface cleaners. Besides, its scent is not appealing to insects, making it ideal in insecticides.