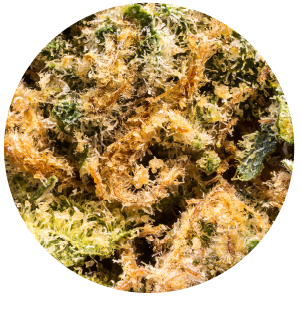 Pineapple Express is a Sativa dominant strain with a 60:40 sativa/indica ratio. The strain is quite popular and has achieved recognition thanks to the stoner film of the same name. However, you have to keep in mind that the strain is not as intense as the movie has made it out to be. Pineapple Express is made by crossing Trainwreck with Hawaiian. Pineapple Express produces long-lasting energetic effects that you can feel right away. In terms of flavor, this strain packs a punch to your pallet with bright citrus notes infused with pineapple and earthy pine, thanks to the terpenes of caryophyllene, limonene, and pinene. Dominate terpenes in Pineapple Express are Beta-Caryopyllene, Pinene, Limonene and Humulene in order of dominance.