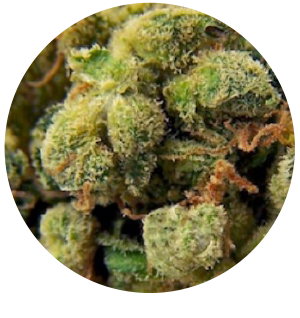 The classic cannabis strain Super Sour Diesel (aka Super Sour and Super Diesel) is a very potent cross of Sour Diesel with Super Silver Haze. It is a Sativa dominant hybrid strain of cannabis widely known for packing quite a potent kick! Super Sour Diesel has a variety of medical applications. It alleviates both pain and stress levels while also inspiring a euphoric creativity, making it great as a supplemental tool for artistic expression. The Super Sour Diesel strain features an exciting twist of tangy citrus and spicy herbs along with hints of sweet, refreshing pine. Dominate terpenes in Super Sour Diesel are Beta-Caryophyllene, Limonene, Humulene and Bisabolol in order of dominance.

Bisabolol is a sesquiterpene found in many of your favorite cannabis strains. It can also be found in the candeia tree, which is native to Brazil. Bisabolol stimulates gastrointestinal tract receptors, thus causing smooth muscle relaxation. Bisabolol is a lesser-known cannabis terpene. These chemicals are part of the plant’s natural defense system against pests and predators. They are produced in resinous glands called trichomes, alongside cannabinoids like THC and CBD. This terpene only exists in small quantities in most strains. Therefore, it does not have a significant impact on fragrance and flavor. However, those with a keen nose may be able to detect hints of bisabolol in some floral cannabis cultivars. It has a nutty, fruity scent with herbal and floral undertones and just a trace of coconut. Bisabolol is also a primary component of chamomile essential oil. As well as being present in high quantities in chamomile, it is a common ingredient in cosmetic and skincare products.