The Legal Magic Mushroom is here.

Amanita Muscaria, commonly known as Fly Agaric or Fly Amanita, is a muscimol mushroom. Arguably the most iconic toadstool species, the fly agaric is a large white-gilled, white-spotted, usually red mushroom, and is one of the most recognizable and widely encountered in popular culture, including art, films, cartoons and video games. Amanita Muscaria has a far-reaching, rich history with roots in many cultures, recreations, and entheogenically in ceremonial settings — and it's still utilized today in many corners of the world. Today's researchers and users have rediscovered what these ancient tribes and indigenous people already knew — this mushroom is more than just a fairytale emblem; it has deep medicinal benefits.

Amanita Muscaria is considered an entheogen. By virtue of its psychoactive effects, Amanita Muscaria is often referred to as a “magic mushroom”, but compared to psilocybin-containing mushrooms, the effects are very different. A. muscaria does not contain psilocybin or psilocin. The active compounds in this mushroom are muscimol and ibotenic acid, with muscimol (a selective agonist for the GABAA receptor) having a sedative, depressant, and deliriant effect.

Although poisonous in it's raw natural form, death due to poisoning from Amanita Muscaria ingestion is extremely rare. Parboiling twice with water draining weakens its toxicity and breaks down the mushroom's psychoactive substances. Care should be taken to prepare the mushrooms properly by thoroughly drying them either in a food dehydrator or oven at a low temperature. The mushrooms should never be eaten raw as this may result in gastrointestinal effects, adverse effects from the ibotenic acid, or allergies to uncooked mushroom proteins. Proper handling and preparation of Amanita Muscaria ingredient ensures safe and effective finished products.

Amanita Muscaria are noted for their hallucinogenic properties, with the main psychoactive constituents being the tryptamines Muscimol and its neurotoxic precursor Ibotenic Acid. Amanita Muscaria also contains small amounts of muscarine, which was originally thought to be the psychoactive compound because it binds with muscarinic acetylcholine receptors. It is present in such small amounts that it is generally treated as insignificant.

Muscimol is one of the principal psychoactive constituents of Amanita muscaria and related species of mushroom. Muscimol is a potent and selective orthosteric agonist for the GABAA receptors and displays sedative-hypnotic, depressant and hallucinogenic psychoactivity. Although it does have psychoactive properties, the effect is very different from psilocybin or psilocin. It reacts with the GABAA receptor and when ingested, it can provide feelings of euphoria and tranquility, an altered sense of hearing and taste, changes to sensory perception and vivid dreams.

Ibotenic acid, a neurotoxic secondary metabolite of Amanita muscaria, is the prodrug for muscimol—during the drying of the mushroom, ibotenic acid is decarboxylated into muscimol. Muscimol is five to six times more potent than ibotenic acid, with fewer harmful side effects.

If the presence of Ibotenic Acid is a concern for you, we recommend formulating with our exclusive Amplified Amanita Mushroom Extracts. These materials have remediated ibotenic acid and contain much higher concentrations of Muscimol than any other concentrates available in the marketplace. Available as 200%, 300%, 400% and 500% muscimol tryptamine concentrations. 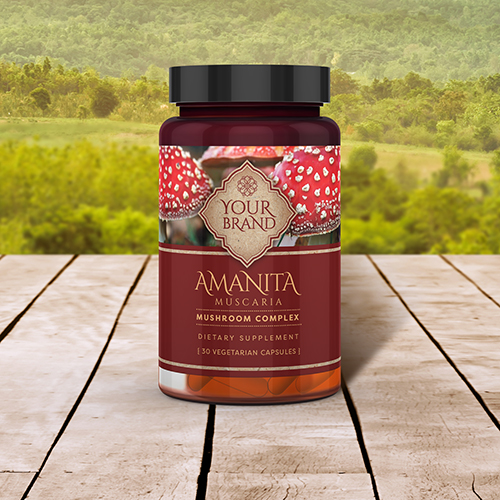 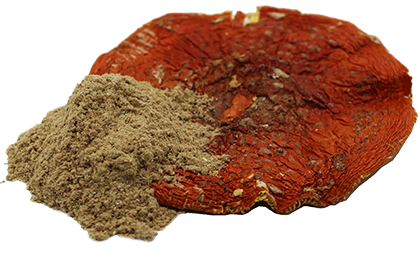 This premium water-soluble and fully decarboxylated Amanita Muscaria mushroom extract is nanotized through our solventless extraction process. We utilize exclusive ultrasonic technology to break down the chitin walls of the material, making it more bioavailable, potent and infusion ready. Amanita Muscaria mushroom extract powder contains a potent amount of the trytamine active ingredient Muscimol and is derived from 100% fruiting bodies only that have been carefully dehydrated and detoxified. Ideal for product manufacturers.

Exclusive fractionation technology makes it possible to yield amplified extracts with muscimol tryptamine concentrations of up to 500% potency of our standard nanotized mushroom extract in liquid suspension form. 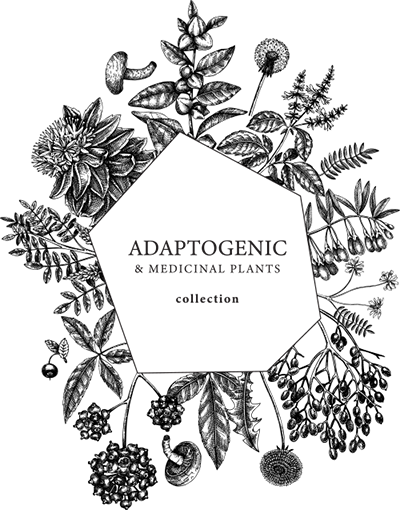 *These statements have not been evaluated by the Food and Drug Administration. This product is not intended to diagnose, treat, cure or prevent any disease. As with all dietary supplements, talk to your doctor before adding to your diet if you are pregnant, nursing or have a medical condition for which you are taking any prescription medications. Amanita Muscaria mushrooms have not been approved for human consumption by the Food and Drug Administration.

What are the benefits of Amanita Muscaria?

The Amanita Muscaria mushroom has been used medicinally for hundreds of years among tribal peoples in Siberia, as well as in parts of Scandinavia, Eastern Europe and Russia, where it has been used both topically and internally for its analgesic, anti-inflammatory, anti-anxiety, and stimulant properties. Recent research on the mushroom’s pharmacology supports these traditional uses of this mushroom and has also demonstrated that certain compounds exhibit anti-tumor and memory-protecting activities.*

For centuries Amanita Muscaria has been used as a homeopathic medicine. There are reports of its use to treat a variety of illnesses, including pain, depression, anxiety, insomnia, fatigue, and addiction/withdrawal. Despite the warnings from mycologists and lingering tales from mycophobia, more people are becoming curious about this fungus and exploring its use as an entheogen, as well as to treat depression and physical ailments. There are reports of individuals microdosing Amanita Muscaria to boost their energy and productivity.*

While cultivation, possession, and distribution of Amanita Muscaria is unregulated by the United States federal government, it has not been approved for human consumption. According to the Erowid Center’s website, “If sold as a supplement, sales must conform to U.S. supplement laws. If sold for consumption as a food or drug, sales are regulated by the FDA.”

Muscimol and ibotenic acid are lethal in very high doses. There are no studies to determine the levels of toxicity or long-term effects in humans. In much the same way as alcohol, Amanita Muscaria is technically poisonous it can be safely consumed in controlled doses. Care should be taken to prepare the mushrooms properly by thoroughly drying them either in a food dehydrator or oven at a low temperature. The mushrooms should never be eaten raw as this may result in gastrointestinal effects, adverse effects from the ibotenic acid, or allergies to uncooked mushroom proteins. Only proper handling and preparation of Amanita Muscaria ingredients ensures safe and effective finished products.

How much should I take?

Body composition, metabolism and tolerance levels are key factors. Titration and having a clear objective is key to figuring out the optimal dose for yourself. The most recommended approach is starting with a small amount until you are familiar with the effects, and increase as you feel the need for your personal objective.

What is an entheogen?

Entheogens are psychoactive substances, typically of plant origin, that induce alterations in perception, mood, consciousness, cognition, or behavior for the purposes of engendering spiritual development or otherwise in sacred contexts.

* These statements have not been evaluated by the Food and Drug Administration. This product is not intended to diagnose, treat, cure or prevent any disease. Consult your healthcare provider before use if you are pregnant, nursing or have a medical condition for which you are are taking any prescription medications. Amanita Muscaria mushrooms have not been approved for human consumption by the Food and Drug Administration.

Muscimol from Amanita Muscaria mushrooms may have anti-cancer properties*